Lauttasaari Water Tower: in Defence of the Cultural and Architectural Landmark 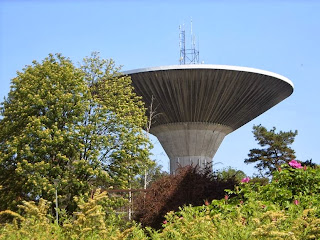 Having heard from a friend that the municipality of Helsinki has decided to demolish the elegant Lauttasaari water tower, I felt severely disappointed. As an architecture historian I would hereby like to argue against the municipality’s decision. In my opinion, demolition of the water tower doesn’t make sense in neither cultural nor economic terms, because the building, despite its current condition, is architecturally and culturally valuable.*

Reasons to save the water tower
The Lauttasaari water tower was designed by architect Ossi Leppämäki and engineer Paavo Simula in 1956-57 and put into use exactly 55 years ago, on 13 November, 1958. A mushroom-shaped building has two large reservoirs which during their use ensured water pressure and supply for the neighbouring areas. The water tower’s main architectural value comes from its innovative building technique. According to Ville Elomaa, it is one of the first buildings in Finland built with pre-stressed reinforced concrete. The tower is also valuable because of its futuristic form – it is a modern and elegant architectural icon which designates Lauttasaari in the wider urban landscape of Helsinki.

The water tower is not only a visual symbol in landscape but also a cultural icon that has become part of the local identity and folklore. At least three generations of local citizens have grown up in Lauttasaari, having the water tower as a silent and friendly witness to their daily routines and personal lives. After its removal from the water supply system, the tower has been used as a venue for art events, most remarkable of which has been the light installation “Water Flower” (2000) by the Dutch artist Harry Hollands. The water tower has also become part of popular culture through different cartoons, logos and even comedy shows. Through the years guided tours have provided occasional access to the tower. Therefore, one could say that the cultural importance of the now 55-year-old water tower has grown in time and could provide a good basis for its future use not only as a building but also as a cultural symbol of Lauttasaari.

Positive scenario for the future
Allow me a small side-step to the southern bank of the Gulf of Finland. Last year, a newly renovated building of the Estonian Maritime Museum opened in the former seaplane hangars at the Seaplane Harbour in Tallinn. Before the renovation, the historical reinforced-concrete structure of the hangars was in a terrible condition. Yet, architects (KOKO Architects) and engineers (from the Technical University of Tallinn) found an excellent solution to save the building and after three years of intensive renovation the museum opened its doors in May 2012. There was a lot of scepticism before the renovation works began but the newly opened museum building stood up to the critique. It has turned out to be an international success not only in terms of architectural and engineering solutions but also in terms of its cultural significance and visitor numbers.

The water tower in Lauttasaari is of course a very different building in terms of size and possible use if compared to the Maritime Museum in Tallinn. Yet, the success of the museum in Tallinn shows that even a building in a bad condition can have a chance not only to survive but provide new cultural as well as economic value for the local area. In order to do that, you just need a good idea and willingness to implement it.

In order to save the Lauttasaari water tower as architecturally and culturally important building, it certainly needs a new function. Mere conservation is probably not enough, because it fails to provide functional flexibility and add new cultural as well as economic value. To get the water tower back in use, it needs not only conservation or renovation, but a severe reconstruction by adding newly designed spaces.

I’d personally suggest the Helsinki municipality to cancel the demolition plan and instead organize a two-phase architectural competition. The first phase could be an ideas’ competition in order to find a suitable function as well as a broader vision for the building and its surroundings. The second phase should focus on architectural design and implementation of ideas from the winner(s) of the first phase. It is important that local inhabitants are included and have the possibility to envision the future of the Lauttasaari water tower. Therefore I suggest the first, ideas’ phase of the competition to be also open to non-professionals.

Lauttasaari doesn’t have many architecturally interesting buildings. Demolition of the water tower would impoverish its local surroundings and urban environment. If the currently closed water tower was reconstructed and opened to public, it could establish itself as one of the cultural and architectural landmarks of Lauttasaari.

*This article was originally published in the Lauttasaari newspaper on 21 November 2013. Photos for the current blogpost were taken from Wikipedia.